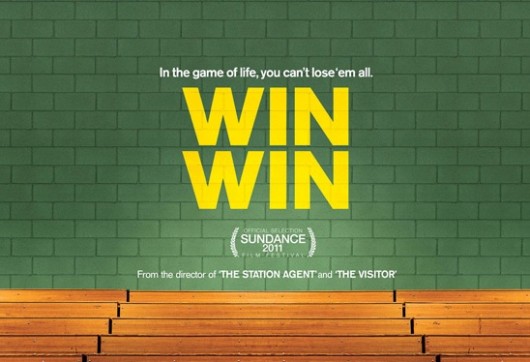 I usually steer clear of films that involve overcoming adversity due to their sycophantic nature that usually leaves me reaching for the sick bucket. However an exception has to be made for the wonderful Win Win, which combines understated acting and a touch of humour to produce a fantastic film, surprisingly full of realism as well as that “feel-good factor”.

The film begins with the frustrated Mike Flaherty (Paul Giamatti), who instantly pulls you in with his enchanting blend of earnest patience and frank honesty. Mike is a lawyer working in a small firm who also coaches wrestling at his local high school. Like any other business, Mike’s law firm is feeling the pressure of the economic downturn. It is this environment that sees him involved in a dubious business deal with one of his clients, Leo Poplar (Burt Young) that sees him become his legal guardian for financial reasons. However things get complicated when Leo’s grandson turns up to visit due to his mothers’ drug problems. Mike feels pity for the young boy and offers to take him in; unaware of the dramatic impact his sporting talent is to have on both his family life and his treasured wrestling team.

Giamatti really anchors the film with his performance, conjuring a subtle chemistry between Flaherty and the relatively unknown Kyle Timmons (Alex Shaffer) who was apparently cast on his wrestling credentials over his acting ability. Nonetheless, it is refreshing to see an indie dramedy that doesn’t involve Michael Cera. The film is also supported by subtly brilliant performances from the likes of Jackie Flaherty (Amy Ryan) and agitated divorcee Terry Delfino (Bobby Cannava) who deftly delivers witty one-liners throughout. The writing is excellent, striking a delicate balance between heart rendering emotional conflicts and cutting comedic quips.

Frustration is a theme that is explored in great depth here and in differing scenarios, whether it’s Mike’s inability to continue providing for his family or Kyle’s longing for a supportive family. However, the frustrations are never presented in a sensational manner, meaning that it’s all the easier to find yourself empathising with the characters. Wrestling is rarely used as a centerpiece of a sports drama, but McCarthy’s decision to use it here is genius. It helps the funny/moving duality that the director has brought to his third feature film, and does an excellent job of presenting a brutally honest yet entertaining sports drama in a way that never comes across as twee or dull.

This entry was posted in Film, Review. Bookmark the permalink.