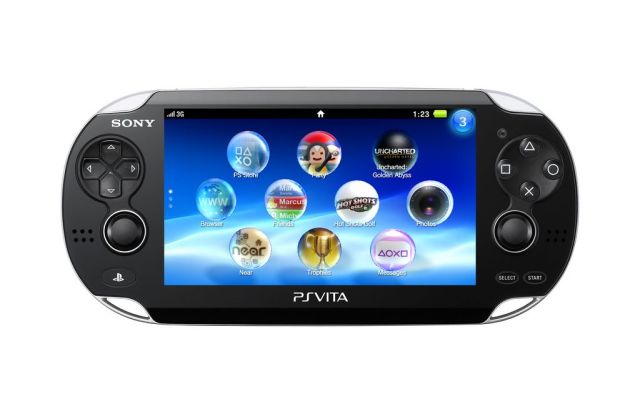 The long awaited successor to the PSP Go was released just a matter of weeks ago after months of anticipation. The PS Vita, Sony’s second handheld console to rely on downloaded software rather than cartridge based games, is undoubtedly a powerful machine. However, is there room in people’s pockets for a dedicated games machine?

There’s no denying that the PS Vita isn’t a size zero device. Weighing in at a hefty 279g and measuring 182mm across, this is only really suitable to carry in your pocket if you’re wearing cargo trousers (so should probably stay in the bag). Along the bottom of the device you’ll find a 3.5mm headphone jack and of course a charging socket using a proprietary connection. This comes as no surprise being a Sony device.

Along the top is an unmarked accessory slot and a memory card slot, which only takes PS Vita memory cards. It puzzles me why Sony has included so many device-specific features in a machine that many will view as slightly superfluous to their needs. Making it as compatible as possible with people’s existing products would surely make it easier to sell. The PS Vita cards don’t come cheap either (Zavvi are selling a 16GB one for £34.95), so be wary that if you plan to use your Vita as your primary media device you’ll need to pay through the nose for storage.

On either edge of the device are Sony’s shoulder buttons. Understandably there are no R2 and L2 buttons, which may make transporting some existing console games to the platform difficult, though it’s hard to see how they could have been included. Sony also appears to have borrowed a few design cues from Apple for its power button and volume controls, as they bear an uncanny resemblance to that seen on the iPhone 4. Everything feels well built and durable – this is a gaming device designed to take some punishment.

The front of device is dominated by a marvellous 5” 960 x 544 Super AMOLED Plus screen which has fantastic viewing angles. Colours are bright and crisp and blacks are deep, although brightness in the unseasonable sunshine we’ve seen recently in the UK was an issue, even when cranked to full. Regardless, Sony has housed a high-end screen in their flagship handheld gaming device and it shows. You can even see how its pixel count compares with other devices by checking out handy guide made by Lukas Mathis and his microscope.

Sitting either side of the screen are Sonys familiar D-pad and gaming controls as well as a two small Start and Select buttons. These respond well and fit nicely with the whole aesthetic of the machine. The ‘pièce de résistance’ though is the two analogue sticks. These are a marvellous design feat and epitomise what the largely useless stick on the original PSP should have been. Despite their diminutive size, they are tactile enough to respond to even the slightest touch and their texture makes them comfortable enough for hours of use.

It is also worth noting that Sony has included two VGA cameras (front and back). It’s best to steer clear of these for taking pictures, although they do prove useful when playing augmented reality games. The back is also home to a large capacitive touch pad, which we’ll ‘touch on’ later.

The PS Vita menu system is an original guise which offers plenty of handy  features. The main screen certainly takes inspiration from the ‘app based’ menu used by iOS and Android – Sony has opted for a selection of ‘bubble’ icons to represent games and system utilities alike. As with any app based menu system, colours and locations can be customised. Despite feeling a little messy at first, navigation is actually fairly intuitive. As well as swiping from side to side, you can also make use of the Playstation button to bring up a list of your last six activities. On a side note, the edges of the icons appear slightly jagged. I’m sure this isn’t due to the display considering its resolution, so can only conclude that low-res icons have been used, which seems sloppy.

Another oddity that plagues the OS is the inability to be able to use the controls, which is essentially the reason you’re carrying such a large device. Navigation throughout the device requires you to sully the AMOLED screen at nauseum. They have also followed the way of the Wii and included some horrendous elevator music to accompany the menus. There are glimpses of innovation to like, such as the ‘peeling’ animation used when you wish to close a game/application, but I’m left wanting more.
Since release, Sony has released updates to allow you to connect your Vita to your Mac as well as PC. The originally named ‘Content Manager Assistant’ weighed in a at a slim 5.5MB (on Mac) and was simple enough to setup. Once it has indexed all the files in your chosen folder location, you can pick and choose which files to transfer on your Vita’s screen. Music plays adequately on the machine, although it’s unlikely you’d be using the device for your audio. The only video codecs currently supported are MP4 or H.264, meaning any AVI files you have will need to be laboriously transferred to be played on the PS Vita.

Arguably the centerpiece of the PS Vita is its ability to play visceral games with ease. And it certainly delivers. Powered by a quad core ARM Cortex-M9 MPCore processor, the Vita delivers near-PS3 visuals with aplomb. Movement is smooth and colours are vivid – the only real let-down is certain textures and shadows. Using the dual-stick controls is a liberating experience whilst on the move – the tactile feedback that physical buttons provide is something never to be matched by touchscreens. It strikes me as puzzling then that so many of the Vitas games rely on touch for navigation. Furthermore, the much touted touchpad that dominates the rear of the device proved to be a source of frustration. FIFA Football, for example, allows you to pick a part of the goal to shoot at by touching the corresponding area of the touchpad. Whilst the innovation exhibited should be admired, I often found my hands inadvertently touching the back of the device. It also seems counter-intuitive to include so many touch-driven ways to interact with the Vita when it’s large size is due to the inclusion of arguably market-leading physical buttons. Whilst including touch capabilities on the main screen is a given in the current market (unless you’re a Kindle), I feel that making the device a bit smaller by dropping the rear touchpad would have made more sense.

You can purchase Vita games either in memory card form or by downloading them from the Playstation Store. Downloading games via 3G is a no-go as most of them tend to exceed 20MB, meaning you’re better off opting for a WiFi version of the Vita. You are able to download demos and trailers with ease, which makes your buying decision a bit easier. What’s more difficult to swallow is the cost of the games. Most Vita games cost from £39.99 which is a phenomenal amount for a game you can only play on a 5” screen. FIFA 12 costs just £3.99 on the Apple App Store, compared to £44.99 on the Playstation Store. With iOS devices enjoying a huge market share, it seems almost arrogant that Sony believes consumers will be willing to part with that much cash for their Vita games. Luckily, games can be purchased in physical form so hopefully consumers will be able to take advantage of the second-hand market in the future.

Once you’ve purchased games, they appear as a bubble on your Vita homescreen. Along the top of the start page of each game is a link to the games website, user manual and update page, which is a nice touch. You’re unable to have a game running whilst you watch a film, although apparently this feature will be included with a future system update.

There’s no doubt that Sony has created a very powerful handheld gaming device in the PS Vita. It has thrown everything it can into creating a machine with excellent build quality that can play cutting-edge games. The controls are tactile and the games look good. However, the PS Vita is let down by Sony’s insistence that you use proprietary peripherals and pay through the nose for games. If the PS Vita had been truly integrated with the PS3, it should have adopted a ‘Triple Play’ model akin to what we’re now seeing with Blu-rays. Buy the film on Blu-ray, and receive it on DVD and in MP4 format for free. Bundle FIFA 13 on PS3 and PS Vita and paying £44.99 makes a bit more sense. Instead, Sony seems to have developed a new platform from scratch which demands proprietary peripherals, as well as overpriced software. If you’ve a long commute ahead, I’d recommend the PS Vita as a capable piece of hardware to keep you entertained. However, on top of a well-equipped smartphone, it’s an expensive luxury.

This entry was posted in Games, Review, Technology. Bookmark the permalink.